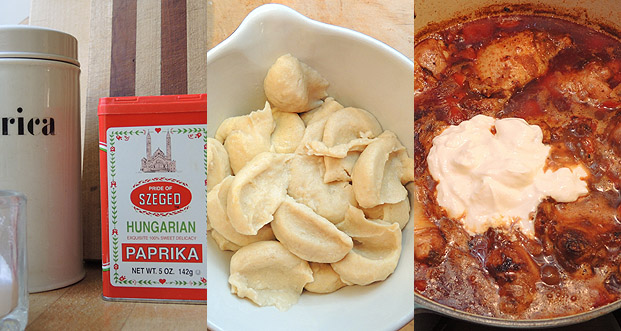 This recipe is based on my mother in laws recipe for the classic hungarian dish.
Whenever I think of her I want to make this dish.  It was always a favourite of everyone in her family. It must not have been easy to keep seven people well fed and happy.
Thank you Anne! 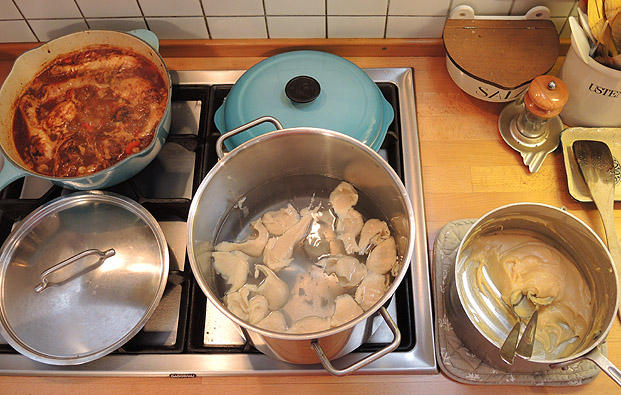 I adjusted some things a little to bring it up to date, for instance substituted butter for margarine.
I also increased the amount of paprika (substantially!) to make it authentic Hungarian.
On the side you should serve galuska, which are hungarian dumplings in my case made with choux pastry. They go particularly well with chicken paprikás with its rich sauce and make the dish complete.
My dumpling version is an approximation of Anne’s original dumplings, nobody really remembers exactly how she made them. However these taste really good and are worth giving a try.

for the chicken paprikás
3    pounds frying chicken, cut into serving pieces
1/4    cup butter
2    large onions, finely chopped
1    red bell pepper cut into coarse cubes, optional
2-3   tablespoons paprika, or more to taste (use real Hungarian, if possible!) I used a combination of hot and mild, decide on how spicy you like it yourself
1/4 cup white wine (Anne used 1 tablespoon lemon juice to get the acidity, I prefer wine)
2    cups chicken broth
1    cup sour cream
2    tablespoons flour
Salt and pepper to taste 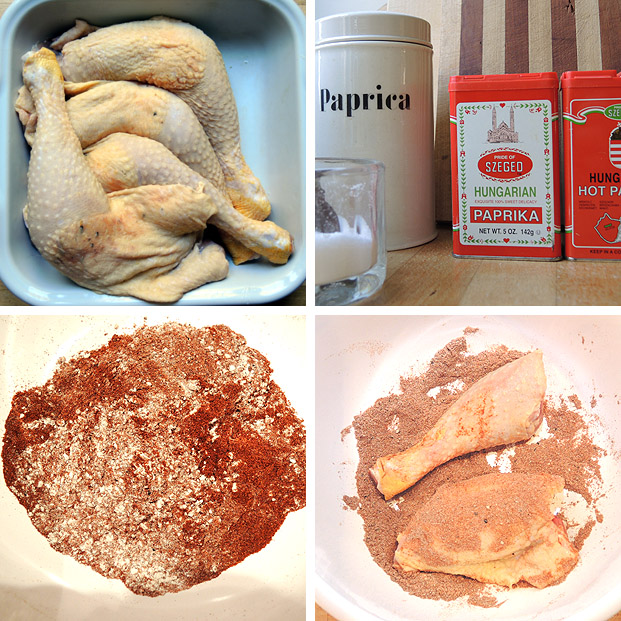 In a 10-inch sauté pan or Dutch oven melt butter and sauté onions and pepper pieces (if using) until transparent and soft. Remove from pan leaving butter behind and set aside. Meanwhile in a bowl combine paprika, salt, pepper and flour. Add chicken pieces and coat them with mixture. 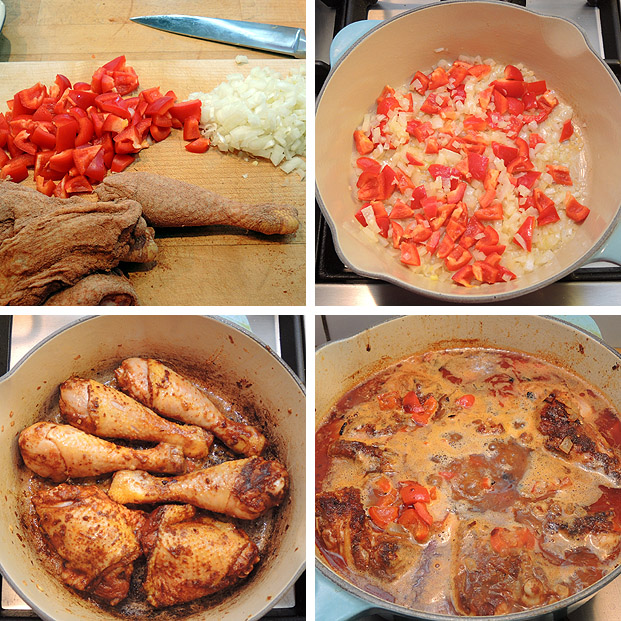 Transfer chicken pieces to the pan and brown on all sides. This may have to be done in batches, avoid over-crowding the pan, rather take out pieces and set aside while the rest is cooking.

After browning all of them, return the chicken pieces and cooked onions to the pan then add chicken broth and white wine (or lemon juice if used). Cover the pan and simmer for approximately 45 minutes. The sauce will have thickened somewhat.
When your galuska are all cooked (see below) add the sour cream to the chicken and stir to combine. Adjust seasonings if needed.

Meanwhile prepare galuská according to this recipe:

Bring a pot of salted water to boil, for the dumplings. 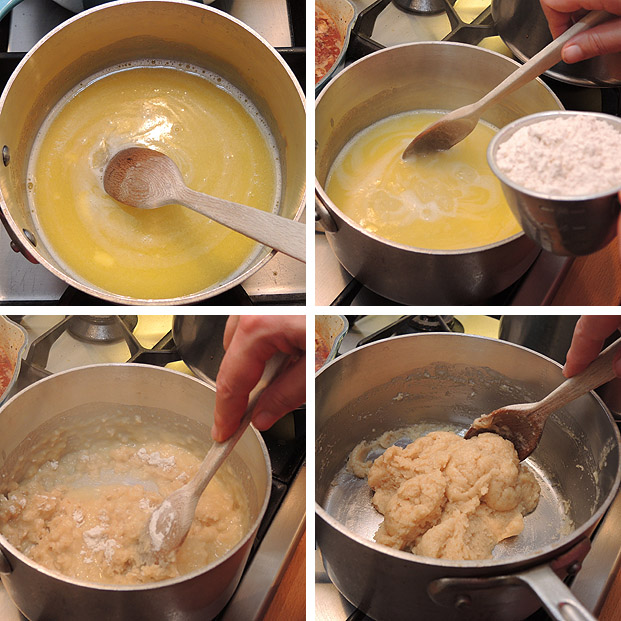 In the meantime in an 8-inch sauce pan bring water, butter and salt to a boil. Dump all the flour in  at once and immediately remove pan from heat so it doesn’t burn (you can turn off the burner, you won’t need it any more). Stir with a wooden spoon until mixture is stiff and forms a continuous mass, this takes a bit of strength as the dough is pretty dense at this point. 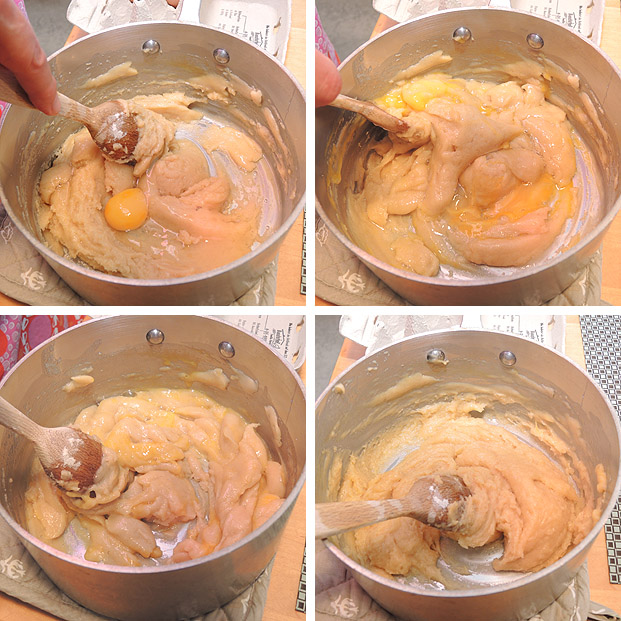 Break the first egg into your pan with the dough and stir until completely incorporated. Repeat with remaining 3 eggs, 1 egg at a time. 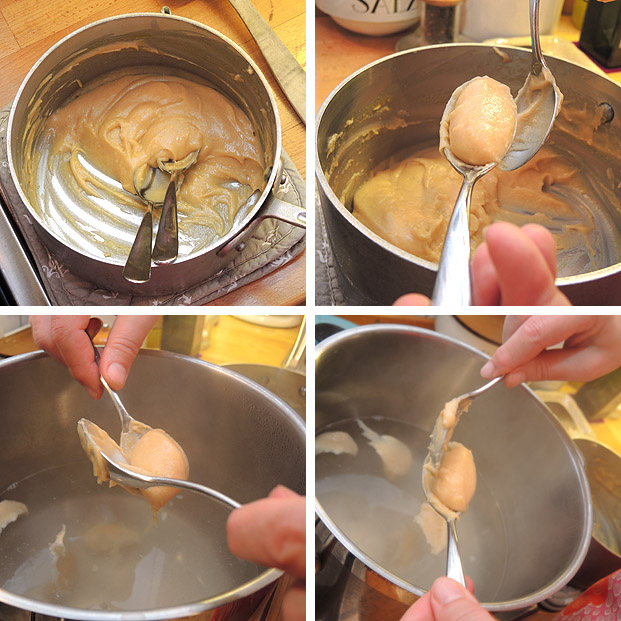 Your salted water should be boiling by now. Use two table spoons to form dumplings and drop the batter by scraping one spoon against the other into boiling water. This is not a beauty contest, they look (and taste ) best when they have somewhat irregular shapes. Quickly form more dumplings until a single floating layer fills the pot.

Turn down heat to a simmer and cook approximately six minutes. Remove dumplings with a large slotted spoon and transfer to a preheated serving bowl (you may want to add a pat of butter to avoid sticking). Prepare and cook the remaining dough in this manner in batches until finished. Serve dumplings with chicken paprikás and ladle lots of sauce over them. 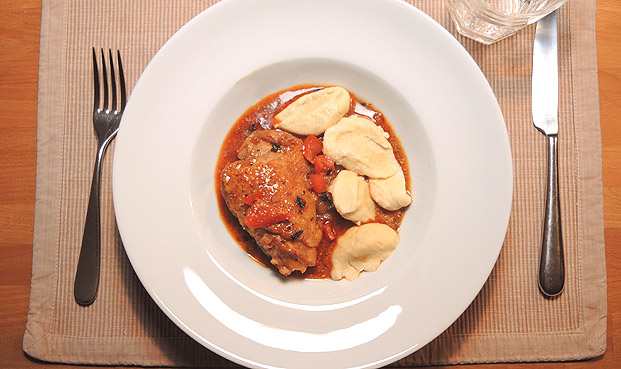 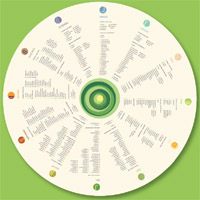